The 2009 EISA contains the current efficiency regulations for a wide variety of equipment and industries. 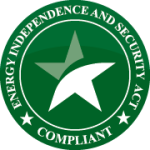 On January 4, 2007, President George W. Bush approved and signed the “Energy Independence and Security Act of 2007”. A portion of the Act includes new regulations on Walk-In Coolers, Freezers and Refrigeration Systems. We would like everyone to be aware of the guidelines that were put into effect January 1, 2009. U.S. Cooler® is fully compliant with these regulations.

Click the following links to review the 2009 Security Act.

(These are pdf files. If you do not have a pdf reader please visit get.adobe.com/reader )

In accordance with section 312 (c) of the Energy Independence and Security Act (EISA), the U.S. Department of Energy (DOE) published a Notice of Proposed Rulemaking (NOPR) for the test procedure on walk-in coolers and freezers. The NOPR is the first published document for the test procedure rule-making process for walk-ins. DOE proposes the procedures explained in the NOPR be used to test walk-in equipment for certification, compliance, and enforcement of the energy conservation standards.